S&OP has the potential to transform an organisation. S&OP can do more than create a rolling forecast, contribute to improved strategy execution and company performance. By driving and nurturing effective values and behaviours through the S&OP cycle, it can influence company culture and employee engagement, well-being and performance. Once S&OP is influencing company culture for the better and achieves these type of employee benefits, I consider S&OP transformational.

As described in my Foresight article, for S&OP to be most effective, it requires a positive, growth-oriented, mentally tough mind-set as well as constructive behaviors. As some research suggest that 30% of people are selfish and 30% of people are takers rather than givers, it is unlikely that a critical mass of effective S&OP behaviors is present in every company. Where it is not, S&OP implementations require that executives lead and endorse behavioral change.

Once S&OP reaches a certain maturity and level of integration where it effectively supports business governance and strategy execution, it can be used to support or instill preferred behaviors in a company culture. Rather than being dependent on the company culture for its implementation and effectiveness, S&OP offers a CEO the means to influence company culture with the result of improved employee engagement and psychological well-being.

For S&OP to work well, we need all six elements to work well. To lead an organization in values and behaviours that are favorable for successful S&OP, executive leaders require both capability and willingness to lead.

The different types of S&OP

Different levels of leadership willingness and capability to support favourable S&OP behaviours, result in different types of S&OP.  With the five elements from Tuomikangas & Kaipia in place and a critical mass of executive leaders with the capability and willingness to lead in favourable S&OP behaviours, effective S&OP can be established over time. Without executive willingness and capability, effective S&OP is a mission impossible, even with Tom Cruise as S&OP leader.

If there is emotional capability but no willingness or believe that favourable S&OP values are the ones to live by, S&OP becomes Machiavellian. Emotionally capable leaders will use S&OP meetings to trick each other in getting their way, reject facts, blatantly lie, have hidden agendas, hijack or sabotage meetings when required, purposefully manipulate others or bring them emotionally of balance to win an argument. In this environment, S&OP meetings turn into a shark tank.

If there is behavioural willingness but no capability, S&OP will never be fully effective. S&OP might have all the right data inputs and structures, but will lack open debate, constructive conflict resolution, the showing of vulnerability and building trust. Communicating outcomes of the S&OP meetings to focus the business and emotionally engage employees with the strategy will be hard for these type of leaders, who functionally might be very capable. These executives can be very good at understanding the market, the strategy or the P&L. But similar to Dustin Hoffman in Rainman, who was brilliant in counting cards, they will not be great to emotionally connect and convey an engaging message to their employees. Let’s therefor call it Rainman S&OP. The different types of S&OP are shown in the table below. 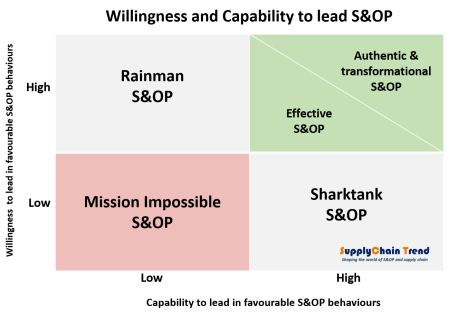 For S&OP to be transformational, leaders require one other element; authenticity. The authentic S&OP leader takes willingnes and commitment a step further. This leader has a deep believe that the underlying S&OP principles are values and behaviours one should live by. There is a inner believe and emotional involvement with the fact that S&OP is a process that has seeking alignment, integrated working, open communication and building trust at its core. There is intrinsic motivation to set the standard and lead the way to behavioural excellence to support S&OP. There is a desire to coach and help other people in the organization improve their behavioural capability. Only with an authentic believe in these favourable S&OP behaviours, leaders have the energy to stay committed over a long period, overcome resistance, remove obstackles and keep working tirelessly to build a company culture that has favourable S&OP behaviours at its core. Therefor, only with authentic leaders can S&OP seriously influence a company culture for the better and become transformational.

One thought on “Why Authenticity is Key to Transformational S&OP”