“If I have seen further, it is by standing on the shoulders of giants”, Isaac Newton famously said, talking down his own innovative thoughts on gravity. Einstein took Newton’s theory further to general relativity, but then he didn’t really believe in quantum mechanics. Fast forward to 2012 and only last months, the world discovered the Higgs boson -or God- particle. A particle that only existed in theory for 40 years.

All scientist happy, but then, science is different then business right? Samsung has to pay 1 billion $US, because it infringed Apples patents in their mobile phones. According to Samsung’s, it was “unfortunate that patent law can be manipulated to give one company a monopoly over rectangles with round corners” and “patent law should not be twisted so as to give one company a monopoly over the shape of smart phones”. Samsung are not just copycats, they have been in second place, only after IBM, to file patents for a couple of years now.

Ever seen a rectangle with round corners and a curved back before the Iphone? Check out the 1949 Frigidaire by General Motors. Looks pretty much like a very big Iphone to me. GM might have to look in their patents and start suing Apple right? 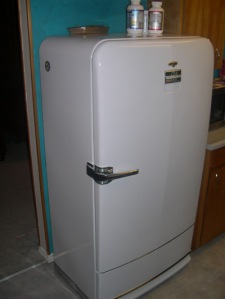 Steve Jobs was a genius and master of slick product presentation and understanding consumer experiences. He too though, stood on the shoulders of giants. De Mac wasn’t the first PC, the mouse not the first mouse, the ipod not the first MP3 player, the Iphone not the first smart phone and the Ipad not the first tablet. The cloud wasn’t invented by Apple. Like some of the smartest brains in history, Steve Jobs and Apple got many of the inspiration and innovative ideas from their surroundings and predecessors. But their reaction wasn’t as humble as Newton.

I still love the look and feel of my Apple devices, but I lost the love for the brand and company Apple a while ago. Apple reminds me of a big empire just before its fall. It’s getting too big, a bit too arrogant, getting too many enemies, fighting too many fronts. History shows that all empires fall in time. Maybe Google has to step in or we have to wait for the next disruptive technology. It might be a short term battle won for Apple, but to me it feels like they just started to loose the war!